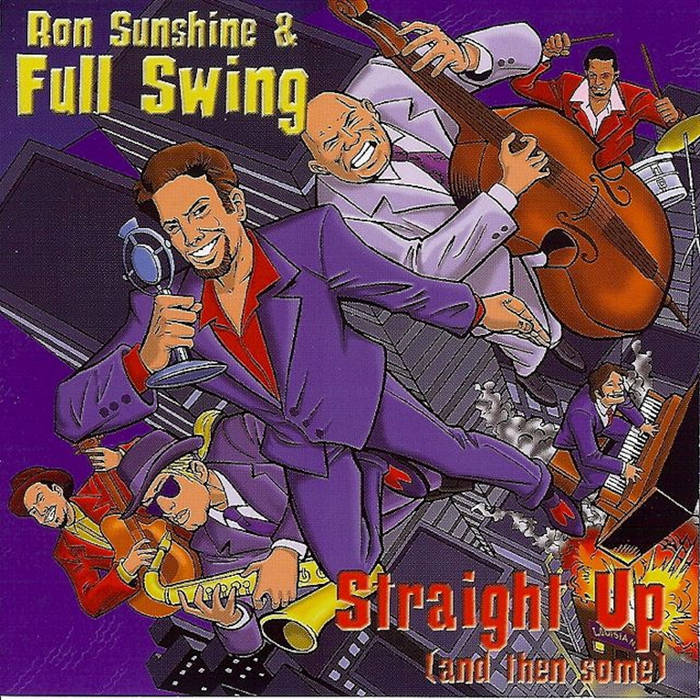 Where blues and jazz meets early R&B and gospel forming the roots of rock n roll. Featuring a duet with Madeleine Peyroux on "Lounging at the Waldorf."

Horns on "Is That the Moon" arranged by Tim Ouimette

The bottom line is the music, and if any band swings harder, more naturally or with more genuine, unpretentious savoir faire than Ron Sunshine & Full Swing, I haven't heard it yet.
--Lee Jeske of BILLBOARD, THE NEW YORK TIMES, ROLLING STONE, etc.

Move over Voodoo Daddy, now there's something hipper. Local swing fans, pat yourself on the back and say, "I've known about Ron Sunshine for years." For those only recently tuned into the revival, you're just in time to see Sunshine come full swing from the dirty days at Tramps to the sleek'n'chic dinner dancing joint, the Supper Club.
--Robin Rothman of THE VILLAGE VOICE (6/29/99)

One of the leaders in the millennium blues movement. Along with Robert Cray, Johnny Lang, Kenny Wayne Shepard, Blues Traveler, Sy Klopps Band, Ron Sunshine and Buddy Guy, Pete Special will be laying down the future of the classic American music in the years to come.
--Dan Aykroyd, Host of THE HOUSE OF BLUES RADIO HOUR

"Straight Up" is that rare breed of album--a disc that left me slack-jawed with wonder at its quality, integrity, and musicianship from start to finish. Ron Sunshine & Full Swing are a much needed breath of fresh air.
--Julio Diaz of Ink 19 (national, September 1999)

All in all, possibly the best album yet by a neo-swing band.
--Steve Holtje of CDNOW.COM (reviewing "Straight Up" by Ron Sunshine & Full Swing)

Finally something good to come out of the whole '98 Swing movement. ... If you really want to boogie in '99, pick up this disc of authentic Jump Blues. ... If you've got any taste in music, the next time someone plays "Zoot Suit Riot," you should blow their head off with a shotgun and then play this while their corpse rots--HIGHLY recommended.
--Cameron Davis of GRINDSTONE MAGAZINE (Spring 99 issue, reviewing "Straight Up")

Ron Sunshine is a star! Vegas doesn't know what it's missing.
-Kerry Burke of NEW YORK.CITYSEARCH.COM

Take Ron Sunshine & Full Swing, a New-York-based swing band. Sunshine's marquee tune, "Enough For You," is the most popular swing selection on the MP3.com site. "I think it's definitely helped quite a lot, especially with the younger people," Sunshine said. "I get thousands of emails from kids who say they heard our song on the Internet."
--Ron Harris of ASSOCIATED PRESS (story ran internationally)

Singer, songwriter, harmonica player Ron Sunshine was born in Denver, moved to NYC in '81, and started paying music full time in '90. He has released six albums, toured internationally, and recorded &performed with the likes of Dr. John, The P-Funk Horns, Pinetop Perkins, Wilson Pickett, and many others. Ron & band continue to dazzle from NY to Los Angeles, Paris to Stockholm, Bermuda to Red Bank. ... more

Bandcamp Daily  your guide to the world of Bandcamp